My mother. She looked like me, only she was more beautiful. She was slender and diminutive, but not frail. She had mocha-colored eyes and that lovely, warm olive skin that never burns in the sun. She always appeared ten or more years younger than she was, so fresh and feminine were her features. She had the cheekbones of a goddess and auburn hair that looked silky even after months of chemotherapy.

Aside from her beauty, I don’t know very much about my mother. Her birth name was Carolanne Daigle and her birthday was sometime in September. She was born in Schenectady, New York, to a woman named Doris, and her birth father, still nameless to me, was apparently half Native American. My knowledge falters deeply after that. Because even though my mother may have possessed the sweet-tooth charm of a child, she lived her life like a feral cat. Cousins her age tell me that she was wild and unpredictable as a teenager. She had a careless, distracted way about her, sometimes she reminded me of Courtney Love giving an interview on the Howard Stern show. She was free-spirited, fun and spontaneous, but lasciviously dangerous. In all the time I spent with her as an adult, I never got the full story from her about anything. I don’t know what high school was like for her. I’m still not sure how she met my father, I don’t know what her first home smelled like to her, or if she wanted to be a ballerina when she grew up. I never heard my birth story. And I will never really know why she gave up being my mother when I was four years old.

Of course, there are a few palpable things I can blame for her absence: her addictions, undiagnosed mental illness, and the fact that 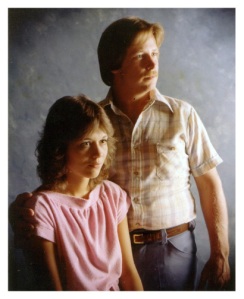 my Grandparents did their darndest to keep her away from me and my brother when we were young. But I don’t think I really know the truth. Through my entire childhood, all I knew about my mother was the dismissive attitude my family had toward her, and the details in the arrest reports with her name printed in the Sentinel & Enterprise newspaper. The thing I remember most about this time was the lonely, unyielding feeling of having been previously abandoned by the person who was supposed to love me the most. There was a mother-shaped hole in my life, and its emptiness has rendered parts of me in ways that have made me both stronger and weaker as an adult. Although I’ve grown up and thrived quite well in my life despite it all, nothing can change the fact that my own mother chose not to be my mom.

When I was in high school and college, Carol reached out to me a few times. Once there was a teary and frightening alcohol-fueled ride around town with a bottle of Jack in the center console; another time a visit to see me cheer for my school’s basketball team. No two visits were the same. After one of the many long stints of not hearing from her, she showed up uninvited in my foster home to see me on a warm afternoon in May. She stood at the bottom of my Aunt Pauline’s driveway, wearing a flowered sundress, and she looked like an angel. That pretty sundress, and her prettier smile, concealed so well this person who had lived so hard, had been in prison for years. I felt that she was a broken bird, someone who would never see the world right-side-up. She hid a secretive, dark lifestyle that involved creepy men and dilapidated apartments in notoriously bad neighborhoods. I didn’t know what she did for work, and something always told me I didn’t want to know. And as I learned after college, the closer I got to her, the less I realized knew about who she actually was. But I knew in her own way, she just wanted to have a daughter, and she wanted me to look up to her. She wanted me to forgive her for leaving me, and that was impossible for me to do without knowing anything about why it happened. But my actual resentment would never compare to the burden of guilt and regret that she carried around with her like a plague, a black bile. Like a cancer. She was so angry at herself for abandoning me and my brother, that she never let me forgive her. Just looking into my face, a mirror reflection owed to genetics, it must have killed her. Looking back now, maybe it did.

My mother had cervical cancer. It’s a type of cancer that is normally quite curable, but she ignored the problem for so long that it had metastasized before she ever had a chance. I think perhaps it was her way of punishing herself. They did chemo and radiation, but it only held off the disease long enough for it to come back with full valor the moment we all thought she was cured. I heard the news late, of course, being that I’d lost track of her once again. And when I did finally get word about it from my brother, a lot of feelings went through my mind at once. Pity, obligation, resentment, and fear. The most surprising feeling was relief. All my life I had a deadbeat mother; deep down inside, the feeling struck me that maybe it would be better to have a dead one.

Once I got word about her illness, she didn’t want to see me. I had to barge into her one-room apartment, which wasn’t hard considering the building probably should have been marked for demolition a decade before. I’d read descriptions of cancer patients suffering through chemo, even took a course on cancer in college, but there’s nothing more startling than looking at a skeleton who once used to be a beautiful person: muscles deflated, teeth and brow bones protruding forward to form a cadaverous grin. The Grim Reaper’s grin. She weighed 73 pounds, had nothing in the way of food except pudding cups and pop-tarts, and there were tubes emptying fluids from her bladder. She was living alone, but I didn’t pity her enough to take on the responsibility of caring for her. I chatted for awhile, brought her a few shopping bags of food and went home. Today, I feel guilty about this choice, and I also feel nothing. I’m not sure I’ll ever reconcile that day in my conscience.

It was my grandmother Doris who finally wheeled Carol out of that dingy apartment, installed a hospital-style bed in the living room of her double-wide trailer, and proceeded to watch her daughter die. At the prompting of my foster parent, Aunt Pauline, I visited twice. Both times I tried to connect with her, but was disappointed. It felt like no one was there, nobody but the very same selfish woman who put the emptiness into my childhood. I quietly resented her being watched over by her own mother; she never took care of me, and she will never have the chance to again. It wasn’t fair, and now she was dying. So what was the point in trying to work things out?

My mother died on May 21st 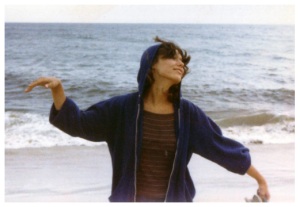 of 2010, at the age of 49, while I was out for a run on some trails in my New Hampshire neighborhood. At one point in my run I looked out onto a clearing, the sun warmed my face and glistened off a wide pond of cattail and waterlilies, and I collided into a butterfly. It was black and yellow and huge, and afterward it floated away as quickly as it came. I heard the news later that afternoon. There was no funeral for her. My grandmother did not want to pay for one. Instead she was cremated and a few days later, my mother’s home health care company held a memorial service. They freed one butterfly for each patient who had died that year. I did not miss the irony.

When my mother was alive it was impossible to see the person that she was. It was much too hard to get past the pain and confusion that had plagued me since I was a young child. I was too angry, and she was too burdened with regret. Now that she is gone I can see her more clearly. Without the possibility of learning more about her, I am better able to paint the picture of what I do know. I can use what’s left of her – photos, notes and letters – and gradually piece her together in my mind. And the most comforting thing for me to realize is that it doesn’t even matter anymore if some of it is wrong.

6 thoughts on “Mother in Metamorphosis”