Get the Book...Read the Book!

Anyone who knows me knows that I don’t like sports.

Despite having been raised by an athletic father who played softball in the summer and hockey all winter, despite having been a basketball and football cheerleader in high school, and despite the fact that I live right smack in the middle of Red Sox Nation, I have absolutely no interest in sports. It’s a lot like living in Nashville and not liking Country Music. While most of my coworkers are looking for tickets to the Yankees/Red Sox game during our next business trip to New York City, I’m mentally planning a quiet night at Shake Shack with the few who don’t give a hoot about which team wins.

No, I don’t like sports at all. But I am a runner. So what gives?

Last weekend I attended the Boston leg of Chris McDougall’s “Naked Run” tour. It was Marathon weekend, so there were tents, noise, streets blocked off and police everywhere. And the glorious finish line was all set up right next to the Boston Public Library, where about 60 barefoot and minimally-shod runners met up to run a 5-mile loop together. Regular Joes and Nancies all pounding the pavement with the likes of Scott Jurek, Dr. Daniel Leiberman, Lee Saxby, John Durant, and of course the man himself, Christopher McDougall. It was probably the coolest run I’ve ever done to date…yes, even cooler than that warm morning jog on Coronado Island last December. Kathy and I smiled until our faces hurt and she snapped a photo every 3 minutes. We ran behind McDougall most of the way, and at one point I was able to catch up to him for a quick chat. It was relaxed, laid-back and beautiful, exactly the things you want out of a run. With a half mile left we stripped off our shoes and ran “naked” across the Boston Marathon finish line and back to the library steps, still smiling like a couple of fools. 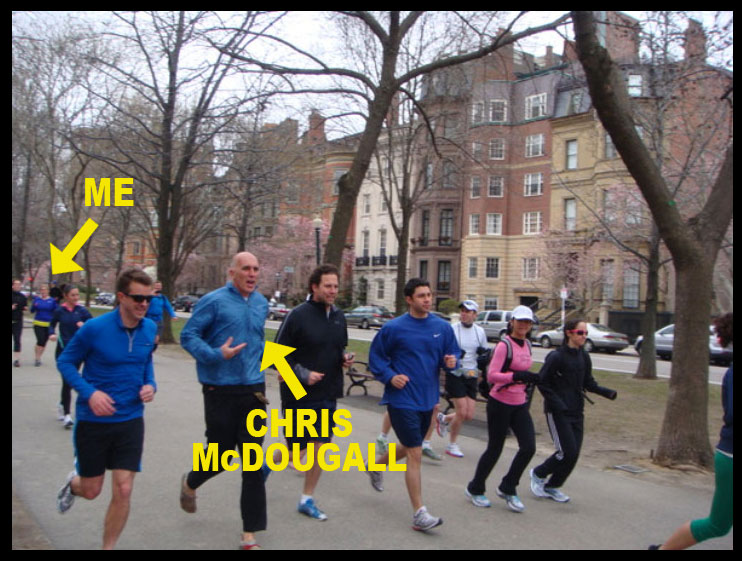 What strikes me the most about that run, and about all of my running experiences since reading Born to Run, is that running represents nothing but joy to me. Unlike those who grunt out two miserable miles on the treadmill twice a week to fulfill their New Years resolutions, I’d rather be running than doing pretty much anything else. Could it be because I took my shoes off? Revamped my slacker running form? Could be. But I think the real difference is that now I see running less as a  sport and more as a practiced art.

The subject of barefoot running is filled with a ton of historical hypothesis, instructional information and biomechanical science. There are books, blogs, videos, forums, events and lectures all over the place about it. Anything you want to know about why you should run barefoot or with minimal footwear, it’s easy to find. There will be at least a few minimalist runners at every 5k and half marathon you’ll enter this year, and every running store worth its salt is carrying at least a few pairs of minimalist running shoes.

I don’t believe that running should be thought of like a sport, or used as a workout that you do to get back into your high school jeans. Those jeans are out of style, anyway. I believe running should be approached as an art form, like dancing, singing, painting or writing. Things that we all do at some level all our lives, as a form of pleasure or social activity. For example anyone can sing, and it’s enjoyable even if you suck at it (think of all the times you’ve belted out “Happy Birthday” to your embarrassed friends and family at TGIFridays). And then there are people like Aretha Franklin, who sing too, just much, much better.

What I’m saying here is that some activities are part of who we are, part of our cultures, our societies. Why have we made running out to be anything different? Running is a default movement of our species. More specifically, it’s a default art form of our species. It’s inherent in all of us to run, just like bopping our heads to a great song on the radio, or drawing a stick figure of ourselves on our notepads during snooze-fest board meetings. We all have the tools to run; our bodies were built with parts meant to make us able to run, stuff that not all creatures have. We run constantly as children, and we do it without the aid of motion-control shoes or GPS watches. Certainly 99.999% of us will never win the Boston Marathon, we just don’t possess the talent. Still thousands show up every year to run it, just the same. It’s because these people know that running is a good thing, and that yes, it’s good for you. These people haven’t forgotten how to enjoy movement. Haven’t allowed themselves to become too distracted by their televisions, their careers or their iPads. They’re not members of the huge majority of Americans who have inexplicably convinced themselves that they can’t run. So let me take a moment here to remind everyone again, in the words of Chris McDougall:

So yes, I believe that running is a form of art. Or at least that’s what it’s become for me (an artist by trade) since reading Born to Run last year. The book taught me that practicing my running form is cathartic on a level superior to deep breathing or antidepressants. That completing a difficult run is 90% mental. And that 10 miles is about so much more than just burning calories…it’s about the journey within myself. Learning these things has made my life happier, and in some ways it has even made me a better person. 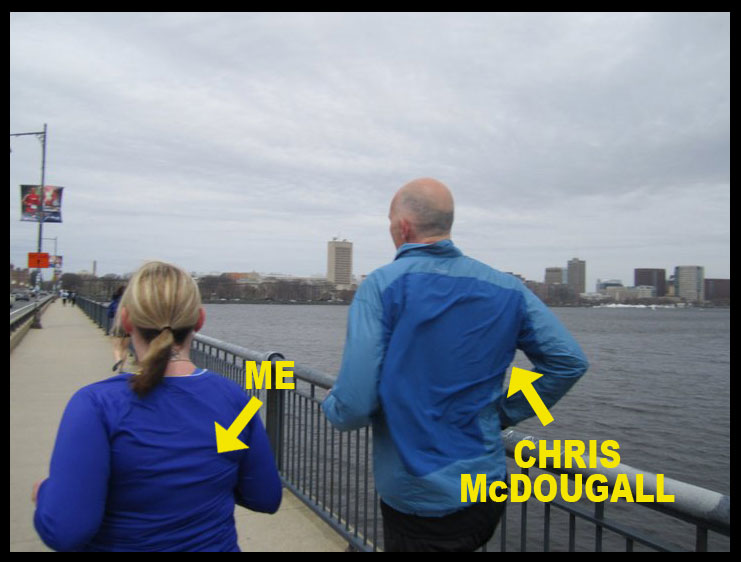 Precisely the moment at which I choked. I thank my good friend Kathy for catching it on camera.

I wanted to thank Mr. McDougall for writing the book that would do such a thing for me, last weekend when I finally caught up to him on the bridge over the Charles River Basin. But instead I choked, and ended up asking him why he wasn’t running barefoot. It turned out okay anyway, and I even got a compliment on my running form. Maybe if I read the book again, I can learn to be zen enough to talk to celebrities without that residual “OMG I’m such a GEEK” side-effect. One can only hope. 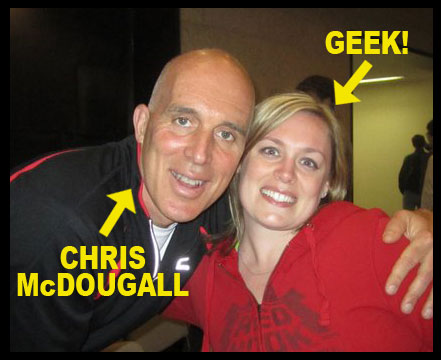 I even geeked-out at the signing.

10 thoughts on “Running as Art”