As runners we tend to cherish and memorialize milestones – pictures of our first race, the mantle especially built for our age-group awards, blogging about our first trail poop.  Zazzle and CafePress offer an assortment of tshirts, mousepads, mugs, and stickers to help us commemorate nearly any achievement, and if we’re lucky we can find one plaque that celebrates several categories.  Recently though I hit a milestone for which I found no sticker – “Congratulations!  Your Injury Just Halted Everyday Life.”  I’ve made a lot of adjustments since hurting myself but remained fairly self-sufficient, until last week.

And the answer to your first question is: yes, I did look for a greeting card.

This may not sound like a big deal but think about it:  Most distance runners train alone. We are responsible for logging our own mileage and make a point to run our own races.  We are used to, and generally pride ourselves upon, being self-sufficient.  My husband calls it being stubborn, but I digress.  Requiring assistance to complete normally easy tasks can be a big deal for someone used to doing things (like running 18 miles) by themselves, or who hasn’t quite come to terms with just another injury that has become a long-term injury.  Realizing I had reached that point was a big deal for me.

I dreaded the idea of giving in to this reality because that would signal that I was definitively very broken.  Utter brokenness would mean The Husband dedicating time and energy to my care; I didn’t want to become a pain in the ass.  Difficulty completing just everyday tasks meant that the road to running recovery would be very, very long. See? I even made a graph to illustrate my point: 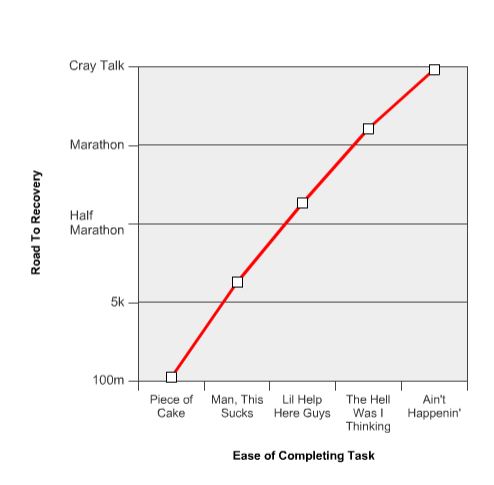 You see, I’m used to my body readily and easily completing whatever task I ask of it.  I lift heavy weights.   I contort into the most awkward positions when doing yoga or helping The Husband repair something in my little Saturn SC-1 coupe.  I pick up socks with my toes and on occasion extend my leg in front of me to open a door. I lay on the bare terrazo floor just because my dog likes me to.  Nothing has ever seemed impossible until now; except maybe flying (but only because I don’t have feathers). But anything else was certainly within reach.

You’re probably wondering during what monumental task did “fuck dude, I really can’t do this” occur to me.  Well, I was buying dog food.  My gym buddy could legitimately argue that my self-sufficiency was foresaken the first time he had to bring me weights for dumb-bell press…but according to me, it was the dog food.

I live with about 260 pounds of cuddly canines that consume massive quantities of food.  Tractor Supply has very large bags of food for a good price but I wasn’t sure someone would be available or willing to help me put it in the cart and take it out to my car.  But my local grocer, Publix, has a reputation for outstanding customer service.  The sole factor determining my purchase –  which store would definitely offer assistance.  There’s something depressing and humbling about requiring assistance rather than voluntarily asking for it; I don’t recall ever having to have help.

I was embarrassed. I don’t look broken, would they believe me or think I am just being lazy?

I was cranky. Some underpaid brat kid who doesn’t even want to be there is going to be forced to serve me.

I was sad. Man, I can’t even carry my own freaking dog food.

But to my surprise, the experience was actually pretty good. So good, in fact, that I wrote to the Store Manager:

I wanted to take the time to inform you of the awesomeness of your customer service, specifically that of Dominic.  Last week I begrudgingly asked for assistance with obtaining large bags of dog food.  My movement is very restricted due to a recent injury and I haven’t quite come to terms with its limitations.

He was like a helpful shadow, never once leaving my side.  Not once did I get the feeling from him or any other employee that I was taking up time or that he should be elsewhere in the store.  Dominic didn’t rush my transaction and even pointed out sale items.  Not only did he procure my items, he also commandeered the cart and offered to visit other parts of the store if I needed.  He took my items through checkout and waited afterward to take them to my car when he could have just as easily pawned me off to whomever normally worked that line.  Additionally, he placed the large bags in the trunk in such a way that they would be fairly easy to remove.

Dominic’s is the first outside assistance I have sought.  Because of his service I’ll be less embarrassed about asking store personnel for help; for someone like me, who isn’t used to requiring assistance, that’s important.

I’ve asked for assistance one more time since then, and it was equally pleasant.  I mention it because the person who helped me was cross-country runner who jokingly reprimanded her coworker for allowing me to pick up a 12 pack of soda.  She threatened to ride home with me to make sure I didn’t pull that stunt again.  Thinking about it makes me laugh now.

It’s been hard to come to grips with my limitations;  I mean, I pretty much went from being able to do anything to virtually nothing in a matter of a few weeks.  Finding the couch more comfortable than the memory foam bed isn’t so frustrating, and I don’t get angry that it’s painful to bend over the sink to brush my teeth.  I pretend my back support is a sexy corset.  Okay not really, nonetheless I rock that damned back support.  Baby steps right?

This whole getting injured thing sucks.  Not being able to easily complete daily tasks sucks even more.

When Lynsey became injured in 2011 she changed her focus from running long-distance to working behind the scenes as volunteer and crew chief. You can find me at various aid stations throughout Florida reminding the runners that "this is not a parking lot."

3 thoughts on “Guest Post: Memoirs of the Hapless Injured Girl”