First off, I’d like you all to give me a pat on the back for finally breaking out the old DSLR camera for my review shots. Up until now I’ve been a lazy ass and have been taking pictures of shoes with my iPhone camera. And while the iPhone is not bad for drunken bar night candids and quick snapshots of weird people at Walmart, I can do much better with the Nikon I paid $800 bucks for and therefore should really be taking out much more often. Besides it saved me about an hour of Photoshopping.

With that said, on to the review.

Fun fact: I didn’t actually have to do a review on the Merrell Dash Glove. Before I met any contacts at Merrell, I was lucky enough to win them from a giveaway on Running and Rambling‘s awesome blog (which I read pretty religiously). Soon as I learned I’d won them I decided to write a review, because up until now I have had nothing on here from Merrell, one of the biggest minimalist shoe companies out there.

Looks
The look of the Dash Glove is bar none. I’ve gotten a ton of compliments from friends, coworkers, even strangers on my pink and purple pair (titled “Ultra Marine” on their site). They look as great under a pair of jeans as they do on the roads. Lots of right-on color choices too. I almost went with the juicy orange-toned “Lychee” color instead, they looked good enough to eat. Much kudos to Merrell’s designers on the look of this shoe – they got feminine and sporty all at once, something not everyone does right.

Fit and Feel
How do they fit? Well, as most of you have heard at least 27 times, I have really wide feet. My only previous experience with Merrell’s barefoot shoes before winning the Dash Glove was of a pair of lime green Pace Gloves that I bought and nearly maimed my poor feet, from their obscenely narrow width (this was before learning that they offered a wide width version). But that’s for another post. What that experience earned me, though, was a wary fear of purchasing anything else from Merrell. So I suppose it was sort of good that I won these shoes. No monetary risk if I didn’t like them. I figured I could give them away to my friend Killeen if they didn’t fit me, because she has a much narrower foot.

So the first time I wore them, I put them on with jeans and wore them to work. At the end of the day I still wasn’t 100% sure about them. They do have a much wider sole than the Pace Gloves, but it was still narrower than I’m used to. I figured they would probably give me some major foot problems if I ever wore them on a run.

So in typical Trish Reeves fashion, I wore them on my 4-miler the next day.

And I’m glad I did, because something interesting happened to this shoe once I got running. The mesh upper started to soften up after about a half mile (probably from sweating – which I didn’t do at work the day before), and molded to my foot. I wasn’t wearing socks so it got a little swampy in there (and I did get a little blister on one big toe), but by the end of my run the Dash Glove really did earn its name. I have been pleasantly surprised.

One interesting, if contradictory thing, about the fit of the Dash Glove is that it is rather constricting to my mid-foot. I would typically find this to be a disadvantage, given that the constriction is technically a form of support, but I admit I like the help (sshhh – don’t tell the minimalist shoe gods). Doesn’t make my foot work quite as hard and keeps the tired away longer. 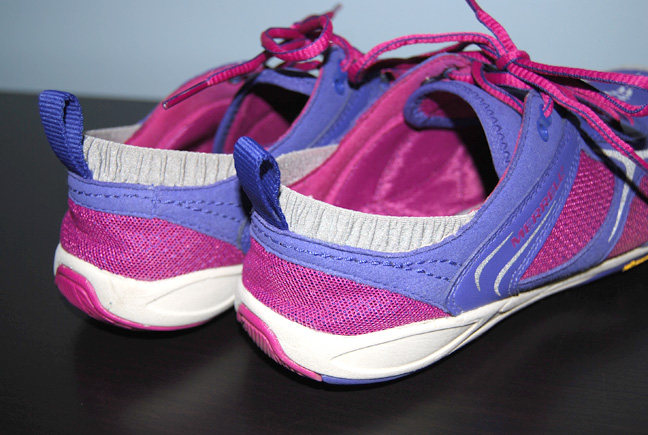 But it also keeps me from wanting to recommend this shoe to a newbie minimalist runner, because I believe a beginner should run in practically nothing until they get their form down (more on this below).

I’ve put about 30 miles on these babies so far, and you can see the footprint I’ve made on them in all the pictures (I prefer taking worn-in photos – you can see brand new shoes all day long on company websites). I very much like these shoes, they are quickly becoming one of my favorites.

The biggest thing to know about the Dash Gloves is that they’re actually the most shoe I have ever worn running since I went barefoot/minimalist two years ago. Most of the shoes I tend to reach for the most can be described as “slipper-like” or “kind of like a sock dunked in Plasti-Dip.”

Although they are definitely zero-drop and by anyone’s definition, absolutely a minimal shoe, the Dash Glove has a thicker, firmer sole than anything else in my closet. So to me they definitely fit more in the “minimalist shoe” category than the “barefoot shoe” one. Because of this, in my own (only slightly humble) opinion, a beginning minimalist runner might be better off first perfecting good form in a more lightly-soled shoe than the Dash Glove, because this shoe has just enough sole thickness to shield poor/heel striking form.

With that said, after two years of minimalist running experience, the thicker sole has been nothing but a relief to my feet. After about 6 or 7 miles, my feet typically start feeling a little beat up, especially on the roads where my forefoot hits the ground in the same place over and over again. Those extra millimeters of rubber between foot and pavement kept the beat-up feeling at bay for much longer. Last week’s 11-miler in these shoes was on the hilly streets of Boston, and the balls of my feet thanked me when I was done.

About six months ago I probably would have shunned such a statement. I would have proclaimed that if my feet can’t handle 7 miles of pavement, they didn’t need more shoe, they needed more training. But now I am starting to see that everything, like the Dash Glove, has its place and its moment.

And to me, the perfect place for the Merrell Dash Glove is the long road run, and it will be my shoe of choice at my next half marathon, coming up in the next few weeks.

My only question to Merrell is this: Since these shoes are basically the female equivalent of the men’s Road Gloves, why didn’t they just call them (Women’s) Road Gloves? The word “Dash” just doesn’t come to mind as easily. Just me…? 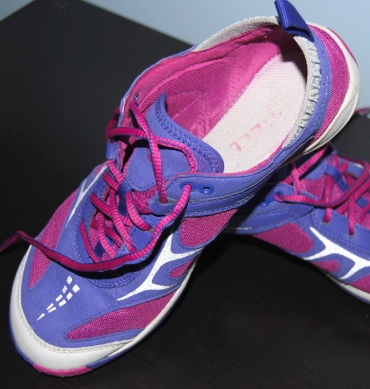