I was recently given the opportunity to review this shoe, but since I’m now unable to run comfortably in traditional running shoes, I was sure I wouldn’t give it the fair review that someone else would. So my good friend Killeen McGowan agreed to review the new Pearl Izumi Women’s Peak II running shoe. I must say they’re absolutely adorable and I’m a bit jealous. Thanks, Killeen! 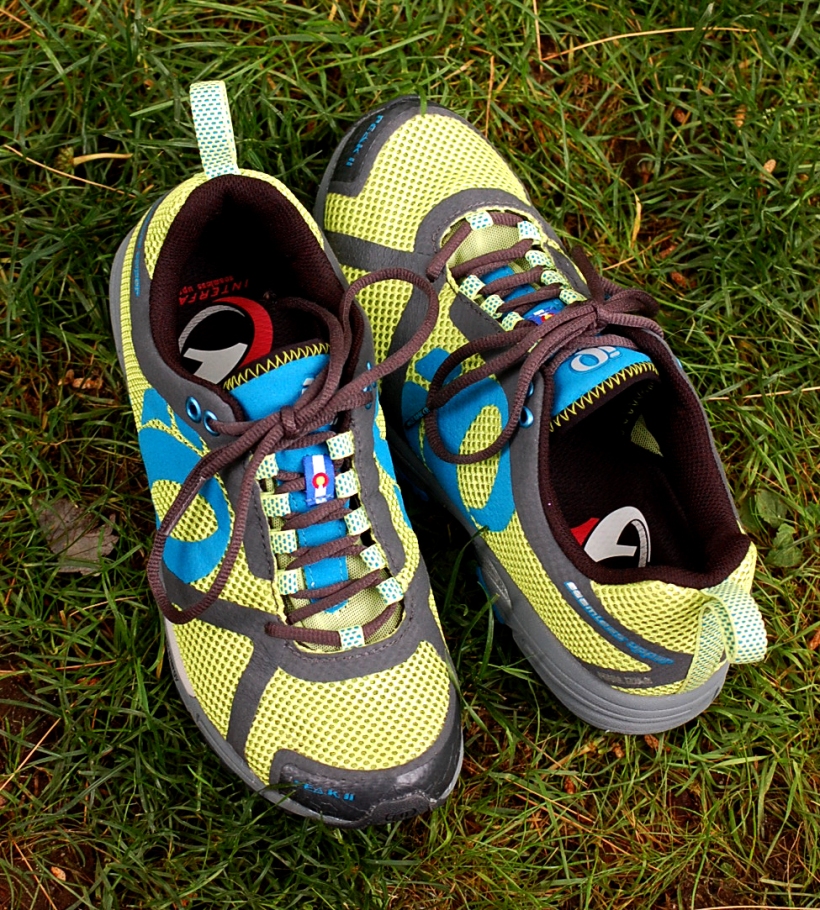 This was my initial reaction to the Peak II Trail Running Shoe by Pearl Izumi [PI]. Just as you can’t judge a book by its cover, you can’t judge a shoe by its exterior.  But, with neon mesh and a swirling logo, it’s hard not to be drawn to – or to apprehensively draw away from – PI’s line of trail-blazing kicks. If you’re like me, fun, funky colors are a huge plus. If not, consider the vibrancy as extra protection during hunting season.

But truly, choosing a running shoe shouldn’t have anything to do with fashion. So, let’s look beyond the aesthetics and focus solely on the athletics of these attention-getting trail trainers.

While not minimalist in specification by any means, the PI website cleverly calls this model “minimalistic.” Though there’s plenty of cushioning in the heel via foam on the insole and a thick, rubber outsole, the shoe’s upper is quite minimalist in nature. The seam-free construction, coupled with a notable lacing system, allows the super-breathable material to give your foot a glove-like hug. If the minimalist movement has you intrigued, this may be a good shoe to help you cross into that new territory.

That said, I put these guys on to go for a short, assessment run. With narrow feet that suffer from moderate bunions, it is difficult for me to find a shoe that fits snuggly enough, yet doesn’t squeeze and aggravate the joints in question. The general fit of the Peak II was immediately true to its claim of “anatomically forming to the foot for a tailored fit regardless of foot shape.” There was no unwanted wiggle room, nor was there much pressure against the sensitive sides of my feet.  Regarding length: these seem to run small. I am a strict size 8 and was thus surprised to find I needed an 8.5 to keep my toes from feeling crowded.

The tire-like tread on the soles of the Peak II handled the rocky, crumbly trails I passed over without any issue. While a little overkill for a paved route, it is rather nice to have the traction when opting to run in the road’s shoulder.  I noticed that the aforementioned heel cushioning was significantly less than that of my typical running footwear, again making my new PI’s a good choice in the transition to a more minimalist style.

What I noticed most about these shoes was how little I fussed with their tightness. I often lace and re-lace before setting out for a run, especially if I’m wearing something rather new. I cinched these shoes up rather tight from the get-go, and I never had to adjust them once. The shoe’s tongue is built in such a way that it blends into the rest of the shoe, versus being this separate, bulky piece that you’d find in most classic styles. The seamlessness was also a huge factor in my comfort, and was likely the reason my trial run was 100% blister-free.

All in all, I was pleased with my experience in the Pearl Izumi Peak II’s. They’re a solid trail runner, and versatile enough for summer day-hikes. They are well aerated, comfortable, lightweight on top, and rugged underneath.

And, not that it matters, but did I mention that they’re fabulously flashy?