It’s been awhile since I’ve added posts to this blog. There’s a bit of irony to this fact, because it seems the busier I am the less time I devote to writing – but the more things I experience, the more I have to write about.

Well, what have I been doing with myself, you ask? True to form, I plan to answer that only in part, and I plan to do it in a very meandering, roundabout way. Starting with a conversation I had last night.

My cousin Alysa and I joined a Monday night running group sponsored by my friend Jon, who works for Merrell. I hadn’t seen him since the Raptor Ridge half marathon last fall, so we used part of the 4 mile trip to catch up.

Jon: So what have you been doing over the past few months?

Me: Well, I went through a brief running rut back in December, but then I picked it up again. And then more recently, I became a hasher.

Clearly, the popularity of the hash run isn’t as widespread as I originally thought. The reality of which has spurned this very post.

What is a hash, you ask? Well, first I’ll refer to Wikipedia for a history lesson:

Hashing originated in December 1938 in Kuala Lumpur, then in the Federated Malay States (now Malaysia), when a group of British colonial officers and expatriates began meeting on Monday evenings to run, in a fashion patterned after the traditional British paper chase or “hare and hounds”, to rid themselves of the excesses of the previous weekend. The original members included, Albert Stephen (A.S.) Ignatius “G” Gispert, Cecil Lee, Frederick “Horse” Thomson, Ronald “Torch” Bennett and John Woodrow. A. S. Gispert suggested the name “Hash House Harriers” after the Selangor Club Annex, where several of the original hashers happened to live, known as the “Hash House” where they also dined.

After the end of World War II in an attempt to organize the city of Kuala Lumpur, they were informed by the Registrar of Societies that as a “group,” they would require a constitution. Apart from the excitement of chasing the hare and finding the trail, harriers reaching the end of the trail would partake of beer, ginger beer and cigarettes.

The objectives of the Hash House Harriers as recorded on the club registration card dated 1950:

At present, there are almost two thousand chapters in all parts of the world, with members distributing newsletters, directories, and magazines and organizing regional and world Hashing events. As of 2003, there are even two organized chapters operating in Antarctica.

Most chapters gather on a weekly or monthly basis, though some events occur sporadically, e.g., February 29th, Friday the 13th, Typhoon ‘T8‘ or a full moon.

At a hash, one or more members (“hares”) lay a trail, which is then followed by the remainder of the group (the “pack” or “hounds”). The trail periodically ends at a “check” and the pack must find where it begins again; often the trail includes false trails, short cuts, dead ends, back checks and splits. These features are designed to keep the pack together despite differences in fitness level or running speed, as front-runners are forced to slow down to find the “true” trail, allowing stragglers to catch up.

Members often describe their group as “a drinking club with a running problem,” indicating that the social element of an event is as important, if not more so, than any athleticism involved. Beer remains an integral part of a hash, though the balance between running and drinking differs between chapters, with some groups placing more focus on socialising and others on running.

Generally, hash events are open to the public and require no reservation or membership, but some may require a small fee, referred to as “hashcash”, to cover the costs incurred, such as food or drink.

The end of a trail is an opportunity to socialise, have a drink and observe any traditions of the individual chapter (see Traditions). When the hash officially ends, many members may continue socialising at an “on-after”, “on-down”, “on-on-on”, “apres”, or “hash bash”, an event held at a nearby house, pub, or restaurant.

In most chapters, the use of real names during an event is discouraged. Members are typically given a “hash name,” usually in deference to a particularly notorious escapade, a personality trait, or their physical appearance. In some chapters the name must be earned – that is, hashers are not named until they’ve done something outstanding, unusual, or stupid enough to warrant a name. In other chapters the process is more mechanical and hashers are named after completing a certain number of events (5-10 being the most common).

A few weeks ago, I joined the North County Hash House Harriers. Since then I have run with the group three times, and also attended an annual event with the larger San Diego Hash House Harriers, where they renamed their management group. I have not yet earned a hash nickname, but I am looking forward to finding out what it will be. And also a little scared.

I like being part of this hash group, the North County Hash House Harriers, or NCH3. I like it so much that I’ve even volunteered a chunk of my free time to designing their weekly newsletter. We have published one issue so far and it was met with a fair amount of appreciation, constructive criticism and good suggestions.

And that’s all the really boring, above-the-board stuff. What I really like about the Hash Harriers is that they are a world-wide group of completely irreverent, politically incorrect, gutter-minded, disrespectful, beer worshiping, bushwhacking trail runners. They ignore fashion trends, make fun of each other, drink booze while exercising, and utilize completely inane terms like “on-in” and “down-downs.” After the runs are over, they call out those who have done stupid things to earn the Grand Master’s attention, and sing ridiculous, barbaric songs to each other. All while consuming at least one keg of beer together.

In other words, I absolutely love it and cannot wait until next Saturday.

Many of my readers (and a few estranged family members) might question my judgment for becoming part of such a group. Perhaps you’d ask why I’d let a bunch of almost-strangers make fun of me publicly and give me a trashy nickname, full of insult and sexual innuendo. You might want to know what kind of training I’m really getting with a running group that spends more time drinking together than running. You might even begin to question my own moral code (as short as it may be), running with a crew of folks who wear knee-socks with sayings on them and call themselves “hashers.”

All kidding aside, I recommend finding and joining a local Hash Harrier group (there’s probably one in your area). And here are 16 reasons why:

Those are just the reasons I can think of while writing this. Hashes are my greatest new find: they are a lot like your average running group, only with a little extra pomp-and-circumstance and a whole lot more beer.

Are you a “hasher” and love it? Have you never heard of such a thing and think it’s fantastic or horrible? Share your story/opinion/questions in the comments below! I would love to hear from you.

Thanks to Vanessa Runs‘ awesome helpfulness, here’s my answer: 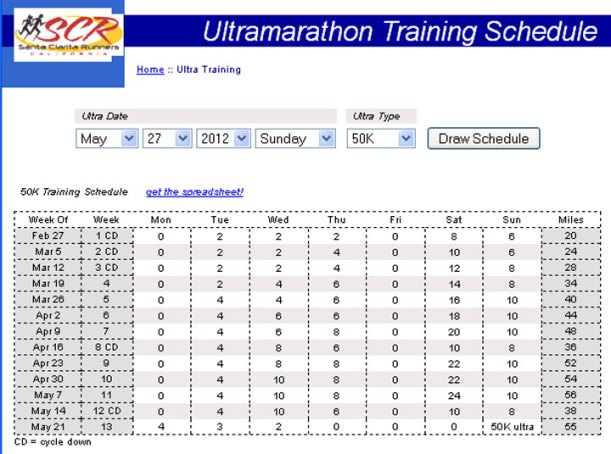 Yeah, you read it right. Back-to-back long runs. Thankfully, the real commitment to craziness, according to this schedule, doesn’t start for a whole month (thanks to a smart commentor, Jason Fitzgerald, for catching it – because I thought it was this week – yikes!). But, I mean…did you see week 11? That’s 24 miles on Saturday and then 10 on Sunday!

Okay, okay. Maybe this isn’t so out of bounds. I did want to increase my weekly mileage this winter anyhow. And I can (hopefully) run without hurting myself if I go nice and slow. I mean, I’m not going to win the race anyway, so forget that. But because I’m REALLY slow right now, I can work on speed during the week, along with some lifting and strength workouts.

I will admit something, though. I am not holding myself to the full 50k, if it becomes unreachable to me that day. I promise not to beat myself up if I have to stop after the first of the two 25k loops (and then beg the race director to let me pretend I’d signed up for the 25k, to avoid a DNF). With that said, if I spend these next four months training my ass off and manage to not get hurt, then I can’t see why a marathon wouldn’t be possible. And once I get to a marathon….well, what’s five more miles? Right?

But I am not completely obtuse. I know that most people train for years and years to get to ultra-marathon status. They run these things with serious goals in mind, besides beer and social networking. They are lithe and strong, they have earned their runner’s bodies, they can easily run a mile in under 7 minutes, and they haven’t eaten ice cream in at least 18 months. And most importantly, yeah so they’ve already run at least a few 26.2’s.

But me? Well, I’m a slow-as-fuck runner who averages between a 10-12 minute mile (these days it’s 12, and sometimes worse), I’m overweight, short, and I haven’t picked up a free weight in…at least 18 months. And I’ve never run more than 13 miles in my entire life. And that one time that I did? I didn’t even do a great job, I ran down a hill wrong and busted my IT band.

And I worked hard for that half mary. Busted my ass, even. I lost weight, worked my way up to three 10 mile long runs and one 11 miler. But since that didn’t seem to work for me much in the end, I think maybe this time I’ll go about it in a completely different way.

Oh, I am going to train. I’ll try my best to knock down all those back-to-back long runs. I’ll start doing strength training to even out. We’ll see how it goes. But if something starts to hurt? I’m going to stop and rest. If it starts to feel like a job? I’m going to stop and rest. If I can’t get all the miles in? I’m going to spend more time at the gym doing strength training. I’m not going to stress about it. I’m going to call these next four months of training The 50k Slacker Program. The way I figure it, I may actually be the least experienced person at the whole race, and my completion of it will be out of sheer dumb will, kind of like Forest Gump running cross country. And because I’m going into this just to have a good time, I’m going to let my Slacker attitude prevail, all the way.

So with that in mind, I have 5 possible goals for this race, in descending order of successfulness:

No matter what happens, though, I will come away from these four months fitter, lighter and stronger than I am today. So even if I don’t complete a single one of these goals on May 27th (although I’m pretty sure that walking around barefoot with a beer in my hand won’t be much to tackle), the Pineland 50k will have done me a whole lot of good.

So what’s to lose, right?

(except dignity, self-respect and the ability to stand?)