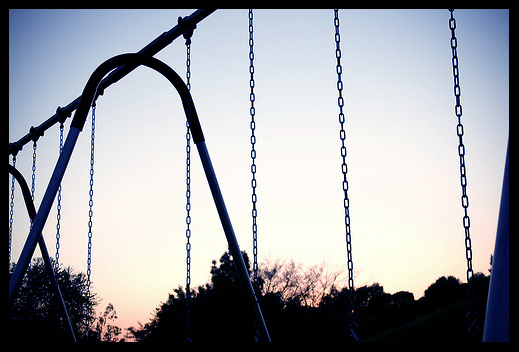 I have never really liked dusk. So disquieting, that brief suspension of time after the sun’s disappearance over the horizon, before the rest of the sky collapses. It’s not yet dark, but the whole world looks different for awhile. Every color except blue fades into darkness and a murky blur descends on the streets, the houses and trees. It is at this time when the long shadow of your loneliness is cast. It’s the place where your skeletons and ghosts come to find you. Where all the ends of things collide.

It was precisely dusk and I was eleven years old, killing time while my father played a softball game for the Men’s League (he used to call it the “Old Fogie’s League,” because it was for guys over thirty). We couldn’t be bothered to sit still through all seven boring innings, so my brother and I were usually sent off to loiter in the playground that was set up around the back of the ball field. This night’s game started later than usual, and as we marched around the outside of the wrought iron fence toward the playground, I could feel the dusk chasing after me. I turned the corner at the back end of the field, and the tall wooden jungle gym came into view, hanging black and heavy against the sky like a great haunted mansion.

All the other kids had long since gone home, and my brother and I were the only ones there. He didn’t seem to notice the creaking stillness of the structure made alive by the heft of its shadows. The site of a deserted jungle gym thrilled the heck out of him. He sped to a gallop and rushed toward the hulking formation. His silhouette disappeared against the blackness and for a moment he wasn’t there anymore. He was sucked into it, and I was all alone. But a few seconds later his boy-shaped shadow peeked out, four limbs and a center blob crossing under the monkey bars from right to left.

My heart began beating again, cautiously. My brother called out to me, and I started toward the solemn giant, either to join the game or to rescue him from his dark fate.