The following post is part of what I hope will be an ongoing writing exercise that my friend Kathy and I have decided to undertake together. We are currently choosing topics from a list of prompts that can be found here. I intend to use a varying array of writing styles and techniques, and to limit my editing. Therefore many of these posts may not look anything like the rest of the stuff I write on this blog. I’m okay with that, if you are. I invite those of you with blogs of your own to participate with us! But if you’re not into it that’s okay too. I’ll title these posts differently so they are easy to skip past if you wish to do so. And as always, thanks for reading! 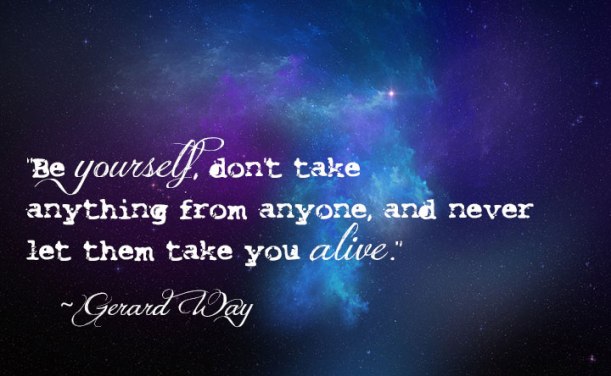 de·fi·ance [dih-fahy-uhns]
noun
1. a daring or bold resistance to authority or to any opposing force.
2. open disregard; contempt (often followed by of): defiance of danger.
3. a challenge to meet in combat or in a contest.

On the whole of my life, I have never really done things the way that I was supposed to.

It all started when I was a baby. My father told me several times the story of my milk bottle. Whenever I had a bottle I would hold it in my left hand, and if he took it from me and put it into my right hand, I would switch it back every time. I defied him to change my left-handedness.

But I guess I never noticed my defiant streak until rather recently, as I’ve spent more time looking back on my life, and surveying the people I have chosen to surround myself with. I used to think that I was the obedient type, because I’m a nice person and I don’t really get into any trouble. But now I realize that even though I wasn’t a troublemaker, in very subtle ways I have always been as defiant as they come. And this defiance has led me to be headstrong, but also quite stable and independent in many very important ways.

When you’re a kid, being different from everyone else is a bad thing. Kids don’t really have enough perspective to find the value in differences: they see any all variation from their own likeness as an obvious negative. Well, come to think of it a lot of adults still think that way, always judging those around them for daring to do things differently. But this post isn’t about them.

As I think more and more about it, I realize I have always been kind of different from everybody else. Growing up, I was the only girl in my family with brown hair instead of blonde, and the only one who wanted to go outside and build forts instead of playing with Barbies or helping the adults cook in the kitchen. I was also the only girl in my grade who went to gymnastics class instead of joining the basketball team.  When all the kids wrote stories for a school-wide literary publication, I wrote a poem with an illustration. In a world full of teachers, nurses and electrical engineers, I got my degree in art.

As I’ve gotten older I’ve come to embrace my individuality. I feel that it helps me to know myself, and knowing myself has helped me to make decisions based on what I want, rather than what I’m supposed to want. For example, knowing that I don’t want to have children. That I don’t like the idea of owning the home I live in. That I prefer the west coast over the east. That I prefer to run barefoot. That I’d rather live in the mountains of North County than in the close, crowded downtown San Diego, where all my cool friends live. I support gay marriage, dig Paleo over Vegan, and would prefer to run with a bunch of obnoxious, tutu-wearing, beer-drinking Hash House Harriers over serious road marathoners, any day.

Historically, I’ve received a lot of flak for my individuality. People just don’t like it when you aren’t exactly like them. But even though I was nice about it, I’ve always remained defiant to the end: I don’t have to be like you, or your daughters or your sister or your last girlfriend or your best friend or the person whose job position I’m replacing. I only have to be me (so screw you).

These are all things I’ve learned about myself, on my own. Nobody influenced or told me to do these things. I don’t follow anyone, nor do I try to cut the first trails. I do what feels right for me, not for someone else. I don’t need anyone to agree with me in order to validate my choices. I just am who I am. I love this chick, and I defy anyone who would try to change her left-handedness.