This Sunday, I’m running my first distance race in San Diego. It’s the Raptor Ridge Half Marathon. Those of you who might know this race, and also know me, are probably laughing right now. Why? Well, I didn’t earn the mock-nickname “Hill Killer” for nothing.

You know. It’s sorta like nicknaming the 300lb Samoan dude “Tiny.” And you’re not really sure if you should call him that to his face because he’s been known to have a “mood problem.”

I love to run, that’s a given. But probably nobody in the trail running community bitches about hills as much as I have. Hell, I complained so much about the relentless hills at my 50K (that nobody else seemed to notice…what was that about?), that my friend Krista designed a “Hill-Killer” t-shirt for her online store because of me.

And dammit, why didn’t I think to order one for Sunday?

Anyway, the Raptor Ridge Half Marathon takes place near Lake Hodges, amidst the various hills and valleys of nearby Escondido, California. The first four or five miles are completely flat and prairie-like, and then the course climbs this pretty gnarly hill for about a mile, back down the other side, and then turns around and goes back up. I stole an elevation chart from the blog of someone who did this race last year: 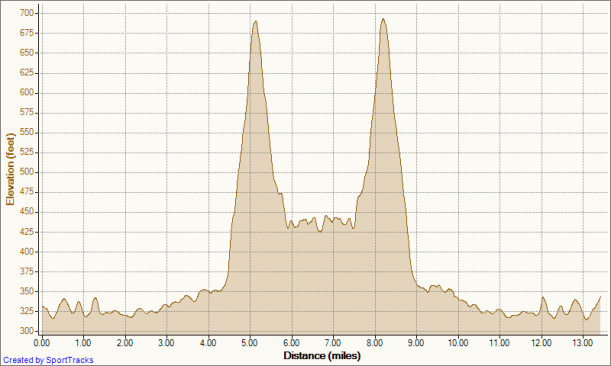 It looks like Batman. I should show my husband.

Now, this race wasn’t totally my idea. I have some friends to thank for my participation in it. First is my friend Shacky, who encouraged me to sign up for Raptor Ridge back when I was still living my safe, flat-trailed New England life. Having run the race before, he knew how hilly it was going to be but still managed to keep a straight face while I rambled on excitedly about “my first San Diego race.” Shacky is like that funny uncle who puts toothpaste in your Oreos and super-glues quarters to the sidewalk. You always trust him when he suggests that you do something “really fun”, even though it’s usually a bad idea.

And then there’s my friend Kate, who has spent the last month dragging me and my hydration pack all over Escondido to run up and down hills until we were both bent over at the waist, breathing heavy like two old men with emphysema. It’s been pretty awesome, actually. I’ve been looking for a friend to really push me for years, and it seems now I’ve finally found one.

Lucky for me (or perhaps not lucky, depending on your perspective), I got to run most of this course already. In two parts. The first time, Kate and I parked at the Raptor Ridge 1/2 trail head one afternoon with full packs, ready to crush that hill. But we never found it because we didn’t realize it was over four miles away, and also we wanted beer. The second time we parked at a lot much closer to the hill and ran up it with Shacky and Vanessa, the two of them bouncing up the ridge like it was an easy straightaway. But I made it up both sides, and we even got to look out over the valley for a moment before flying back down like a bunch of wild, noisy antelope. Okay, not anything like antelope.

This was the first time I’ve ever run on a race course before running the actual race. I’m curious to find out if it makes any difference for me mentally, but I think it will. I have always told myself that I’d rather not know what I’m getting into because if it’s scary, I don’t want to be privy to it. But I think maybe I was wrong all that time, because all week I have been able to put this course into perspective, plan out my pace goals, and mentally prepare for the tough spots. I’ve run this course a hundred times in my head. For the first time in any race I’ve done, I’m approaching it like something to conquer, not just something I hope to finish.

And by conquer I don’t mean foolishly attempting to beat my half-mary PR by thirty minutes or anything crazy-stupid like that. In fact, I’m not even sure I can count on breaking my PR at all. Or even meeting it. My last half marathon was on a completely flat, easy course, and I still didn’t break 2:30. I’m not hoping for any miracles here, but I did just notice that there’s a 3-hour cutoff time. I’ve never run a race with a cutoff time less than an hour outside my personal best. Combined with the added difficulty, I’m a little nervous that I’ll be crossing the finish line on a golf cart with the course sweeper. I sincerely hope that doesn’t happen.

It’s times like these (trail races) where I’m always reminded of how slow a runner I really am. And I’m not saying that so you’ll try to reassure me in the comments section. I am just a really freaking slow runner. I know a lot of it is because of the extra weight I’ve been carrying around these days, and that just adds shame to the slow factor. I’m the slow chubby girl in the slow stragglers section at the end of every race I run, except for the really huge and popular road races that attract 10,000 C25K’ers who just started running for the first time six weeks ago.

But then again I know lots of heavier runners and most of them are faster than me, too. Damn.

So, I don’t know what the real problem is, but it’s certainly not for a lack of trying. I’ll be cruising along at a pace that I’m sure is pretty fast, and I’ll be patting myself on the back for pushing my limits…and then some lithe little number in LuluLemon whizzes past me, pushing a baby carriage.

So I guess my only choice is to take the good with the bad. I’m probably going to be pulling up the rear on Sunday. But I’m also probably going to finish, hopefully before the cutoff, and I’m going to have some friends at the finish line to greet me when I do. Also I’m going to have finished my third half marathon, my second trail race, and my first one among the mountains of San Diego. No matter what happens, it’s going to be an achievement worth smiling about. And there’s also going to be beer. 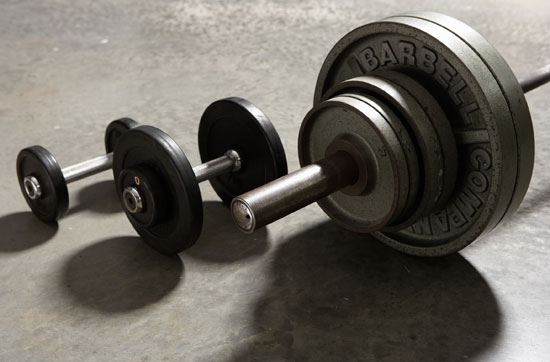 So, I’ve been hearing a lot of the following things lately:

And on and on with the ridiculousness. If you know me at all, you probably know how annoying I think Crossfit is. Nothing against you people who love it, I just…don’t. I really just dislike all that chest-beating, grunting, beastly, anti-runner dogma that seems to emanate from so many of Crossfit’s devotees. In some ways it seems pretentious and showy to me. And not to mention I just hate the idea of having to be inside a gym to work out. 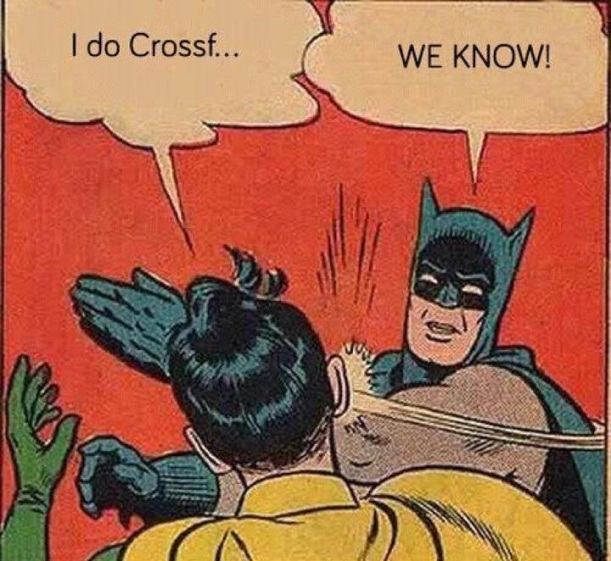 For awhile most of that strength-training noise was coming from the Crossfitters exclusively, which makes sense because most Crossfitters think they’re better than runners. But lately I’ve been hearing more and more support of these crazy ideas emanating from the ultra runner crowd.

I know, it sounds totally counter-intuitive, right? Train for a run by not running? But it really seems to have worked for some of my ultra runner friends, especially the more injury-prone ones. For instance, my friend Krista trained for her first 100k without ever really doing long runs. And my friend Christian does Crossfit workouts almost every day (at least he does them at home) and hasn’t run more than ten miles since probably last spring (nor has he written a single blog post, I might add). But they both do quite well when they get to the starting line, despite spending over 90% of their workout time in the weight room.

Let me say this right now: I will never do that non-running crap. I run. I do it because I love it. And I mean I really love it. I don’t even see distance running as exercise, it’s simply something I want to do. It’s part of my lifestyle. Giving it up altogether in lieu of squat thrusts and 100-Burpee-a-Day challenges would be totally idiotic and counterproductive.

I think there is something to be said for all-around strength and muscle competency. I mean, right now I can’t even do a pull-up. Not even one. Not even with 50 pounds of assistance. And I mean, if you think about it practically, such a lack of upper body strength could potentially translate into a major disadvantage for me in the event of a zombie attack. Sure, I could run pretty consistently until most of them lose interest or manage to die, but what if I have to climb a rope up to a third story building to avoid them? Right now I’d be totally screwed. 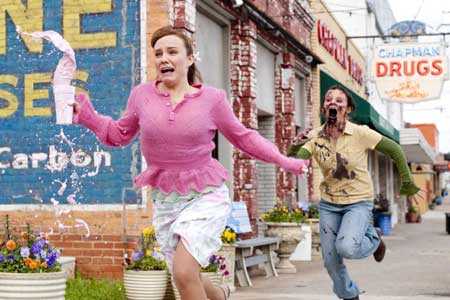 I’d totally live longer than this chick in a zombie attack.

So, here’s what I’m getting at: I have signed up for the Raptor Ridge Half Marathon on October 14th. That’s three weeks away. And because of all the uproar of this move, I really haven’t been training the way I should. I haven’t even run longer than seven miles in over six weeks. But that doesn’t even worry me. Thirteen miles is not much of a feat for me anymore. The problem is that a vast majority of the race involves climbing one giant hill, going back down, and then turning around and coming right back up. And since I have spent the last 9 years running on almost completely flat roads and rail trails, hills and I really aren’t friends yet. In order to complete that half without DNF’ing or dying (which would also result in a DNF), I’m going to need a major strength and endurance overhaul.

Which is why I signed up for a butt-crack ‘o dawn, weekday morning Boot Camp. 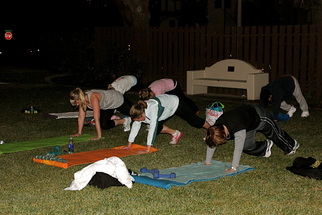 This isn’t my class, but yeah. It’s dark at 5:30am. Prime time for a zombie barrage. Just sayin’.

So for four days per week, from 5:30-6:30am, I have been paying someone to force me to run up over picnic tables, sprint and grape-vine across baseball fields, run obstacle courses, lunge, squat, do pushups, situps, burpees, tricep presses, and so on, until I’m slightly nauseous. I’m curious to see how it will affect my speed and endurance, and I am even more curious to see whether it’s going to matter if I ever do any real-deal long runs before Raptor Ridge.

In addition to Boot Camp, I plan to spend as much time as I can doing hill repeats up God-Forsaken Hill (my nickname for the crazy steep hill that sits directly in the center of Buena Vista park, right across from my neighborhood), running up and down Raptor Ridge and the hills at Lake Hodges with my buddy Kate, and cross-training by riding around on my bike. Which I haven’t done yet, but I will…I swear.

So I guess, in my lack of recent mileage, I’m about to learn how much I really need to actually run in order to be able to run better. Will I become a cross-training believer, or will I regret not running more? I’ll let you know in about three weeks.

So, what’s your take on the whole “cross-training as race training” theory?