At around this time last year I began “officially” working through the weeks of training for my first [minimalist] half marathon. Now that I have gotten over all the “you’re-an-idiot” injuries that kept me from running any other long races in 2011, I find it interesting how different my mindset is this time around.

First, I don’t have a spacial problem about distance anymore. When I was doing long runs, 10 miles seemed reeeeeaaaaaallllly far. And even if I had no real problem getting through 10 miles, the distance still seemed ridiculous. But now, even though my longest run since coming back from injury has only been 5 miles, those same 10 miles don’t seem as long anymore. It could be because over the last year I have made friends with people who run 10 miles for breakfast and another 20 for lunch, but more than that I think it’s due to a complete change in my attitude.

Since the last race that kicked my ass back in June, I’ve changed my GPS watch so that it only tells me how far I’ve gone. No time, no pace, no average pace. Just distance. And if I’m about to run a well-known route, I won’t even take the watch with me. Like Coach Rick says, “Nevermind what the watch says, just run. You’re only going to run as fast as your body can go anyway, and that’s it.” More on Coach Rick later.

These days, I’m a really slow runner. As slow as I was when I first started barefoot running. Well…maybe not quite that slow, but close. But I consider that lack of speed, as embarrassing as it is when I’m running with others, a needed lesson for me to enjoy the journey. I’ve realized I’ve just been dulling my experience by obsessing over how fast I can complete a 5K. And I’m so glad I’ve gotten to this point, it’s huge for me.

I’ve also taken some time to reflect upon my attitude during difficult training runs and races over the last year. It’s an enormous understatement to call myself a complainer. Truth is, I bitch and moan way too much when I’m faced with big challenges. I’ve always told myself that it’s my coping mechanism, but I can sense that I put my running partners off sometimes (sorry, Killeen!), and in all reality it never helped me get through anything. It just kept me from enjoying myself. I realized it when I watched my dear friends cross the finish lines of races with great big smiles on their faces, and mine was scrunched in a scowl. After I finished the half marathon I teared up and wailed out to poor sweet Killeen: “That was really hard!” Not, “that was exciting/fun/exhilarating!” And the race was all those things, but unfortunately for me, I was only focused on the negative parts. Bad attitude to have after completing such a great goal. 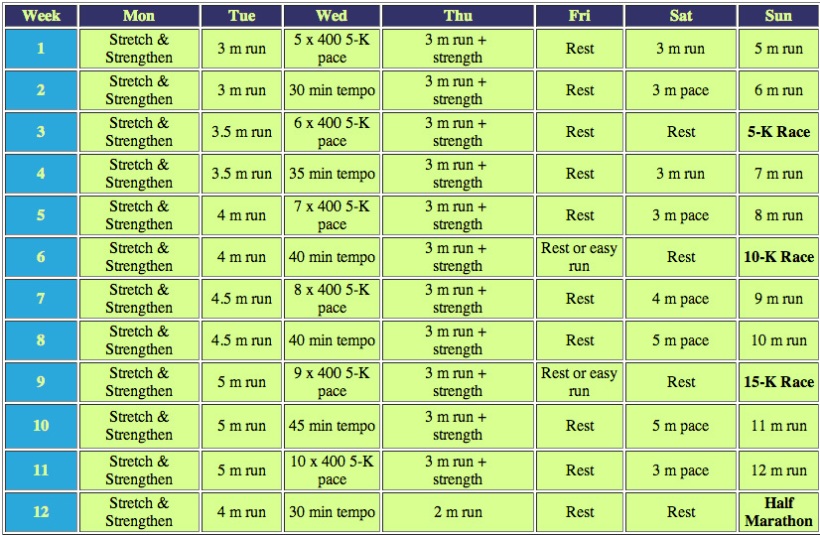 This year's training "outline". I guess that means I'm on week 2. Ish.

It’s time to change that, I think. I must focus on my love for running, not just the difficult parts of it. It’s time to think about how great I feel (even if I’m tired), how awesome my last long run was (even if I had to walk part of it), and how I flew through that quarter mile (even if the rest of the run was really slow).

And nothing will make you rethink your attitude like a Boston Marathon running coach, such as one Rick Muhr.

I was invited to attend a Saturday training run given by Coach Rick, with a fellow (very inspiring) blogger and Boston Marathon runner, Sherée. This was the first time I’d ever met Sherée in person, and also the first time that I’d ever shared a training run with 40+ people and a Real Life Running Coach. I didn’t know what to expect, but I found myself sitting in a large room on the basement floor of the First Baptist Church in Newton, tights-clad butts in chairs lining the walls, every pair of eyes following the man with the inspired voice in the center. Coach Rick is just one of those people: you know the type, the guy who makes you feel like you could save the world with a paperclip. The kind of person who holds your gaze and appears truly enthusiastic about making your acquaintance, who instantly makes you feel important to him, even if you only just shook hands. He possesses the powerful companionability that got Barrack Obama voted into the White House, and the unshakable integrity of your greatest personal hero. The man talked for an entire hour in that church basement, and I was hooked the whole time. He mentioned the training and the fundraising that most of the runners had to do, but he talked about a lot of other stuff too. Motivating stuff. Sad stuff. Awe-inducing stuff. Stuff that you think about later on when you’re by yourself in the shower or having a bad day. All I could think the whole time was, man…if I had Coach Rick last winter, I bet that Incident of the Colossal Hill never would have happened, nor would I have had such a shitty outlook upon finishing my first half marathon. Hell…if I had Coach Rick last year, I might have run an entire marathon instead of just half of one. There was such a sense of community there, that I felt like I could conquer any distance I wanted, as long as I had this team of runners and coach with me.

After the lecture, everyone put on their hats and gloves and filed out the door into the 9am sunshine. An ill-timed bathroom break got us started a couple minutes later than the rest of the group, and I immediately fell behind Sherée while she tried to catch up. I knew my legs would have to last 5 miles so I put on some Florence + The Machine and chugged along happily at my own pace, absorbing Coach Rick’s words of wisdom like the sweet warmth of a summer day. I didn’t let it bother me when just about everyone in the group flew by in the opposite direction, already headed back to the church. Well okay…maybe it bothered me a little, but give me a break I’m still working on it.

The best part of the whole run is that when I stopped to get a drink of water (they had water stops!), and when I joined Sherée and the others at the end, I had nothing but positive things to say. “What a beautiful day to run!” “First five-miler in months!” “I feel like I could run six!” “Those hills were awesome!” What a difference a good pep-talk makes.

As I continue through the rest of my training, I plan hold on to Coach Rick’s words for as long as possible, and perhaps duck into the group again in a few weeks to top off the tank with some more motivation. I still love running alone because I just enjoy the meditative state of focus that it allows me, but there’s really something to be said for that community effort. After Saturday, I no longer wonder how my friend Sherée and some of these other Boston Marathoners made it through their 22 mile runs last year.