I am now approaching the eve of a full year spent living in San Diego, on the other side of the country from where my life began. I have been procrastinating this post for awhile now; partly because I’ve been keeping myself too busy to write (more on that later), but mostly because I wasn’t really sure what’s left to say on the subject without worrying that it’ll sounding braggy or trite. But I think I’ve finally come down from that surreal, vacation-like state of having first moved here, and I’ve had time to reflect on what this year has changed about me.

To be honest it doesn’t even feel like a whole year has passed. More like five or six months. A strange thing happens as we get older: the world just keeps spinning faster and the years fling by like boomerangs. Christmas, birthday, Summer, Autumn, Christmas. I remember being a kid and thinking how very long a year was. “Summer is right around the corner,” my Grammy would ponder, but to me it felt as if decades passed before swimsuit weather was upon us again.

Speaking of my Grammy, she lived here in San Diego once. She and my Grampa schlepped themselves west for promising work right after high school, along with my Grampa’s brother Pete and my aunt Pauline. They only stayed for a year, living for a time in the North Park area with my aunt Marion and her husband. It was tight living quarters for sure, but that was part of the family-centric culture back in the 50’s. Even though it was short lived, my grandmother definitely loved it. I know this because she told me so many stories about San Diego when I was a child that I think the soul of this place was permanently imprinted on me even back then. 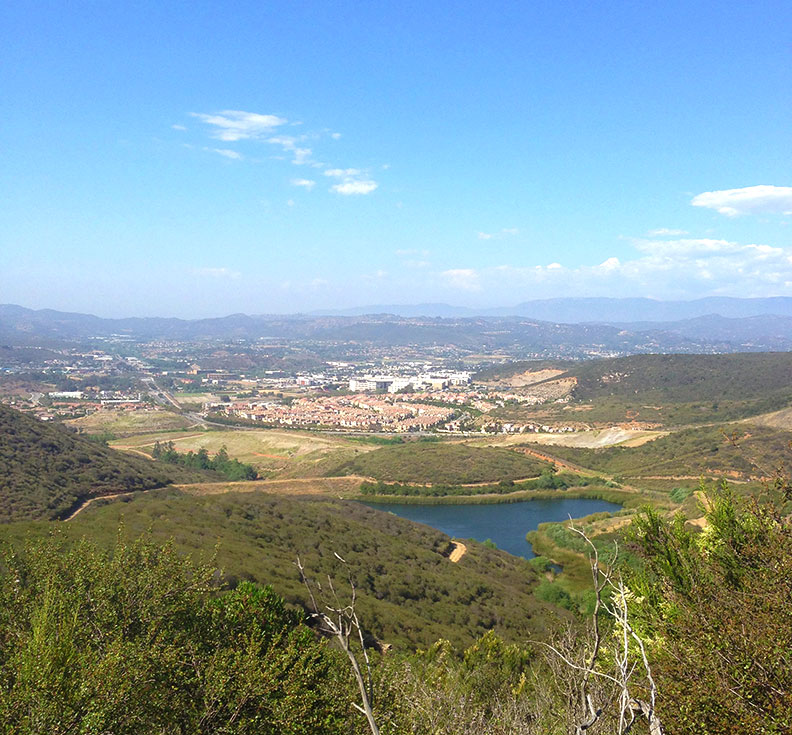 Lake San Marcos from the top of Double Peak. My house may actually be in this photo.

This was apparent when I first vacationed here with Shawn in 2005 – and then kept finding excuses to come back. I knew it then as much as I know it now: this town, by the truest definition, is my home. For 33 years I existed in eastern New England, floundering a lot, finding friends and losing them again, moving from town to town. I looked hard between the forests and the cities for a place I could call mine. A town I would fall in love with. In 33 years I never found one. Finally I began to fancy myself a floater: I figured I must be just one of those people who prefers to be unbound to a particular place in favor of trying everywhere. I realize now I was just unsatisfied.

Unlike just about everyone I knew, I never retained a close-knit group of longtime friends who would drop by the house to borrow a cup of sugar or feed my cat while I was away. I had one or two very close friends whom I love like siblings, but because I moved all over the state we always seemed to be an hour’s drive away from each other. I’ve never been very close to family; both of my parents are deceased and my family of aunts, uncles and cousins are spread out all over New England. And frankly, our emotional distance is even wider than that. I’ve never felt I could count on anyone to be there for me the way I saw others could. I always thought it didn’t bother me, but I understand now that it really kind of did.

But you know, I think we all live our lives normalizing whatever is around us. Palm trees and year-round temperate weather is business as usual for a native Californian. But they were a far-off daydream to me, as I dug my car out of snowdrifts all winter long. A dream so big that I think part of me simply waited to begin living any actual life until I had a permanent tan and a back yard full of queen palms. 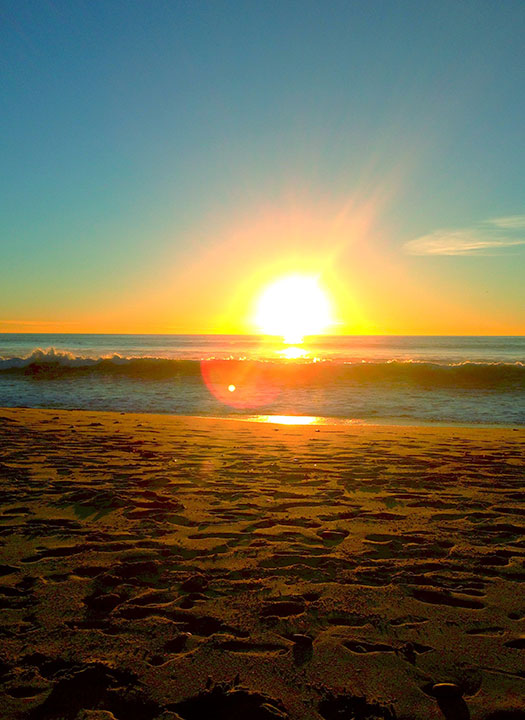 And so here I am. Home, and finally living my actual life. This place suits me like a soul mate. I now get to look out the windows of the loft I’ve made into my home-office at a landscape rife with southern Californian beauty. Rocky hills and mountains in the distance that make way for sun-struck glimpses of the great Pacific, hawks flying above, coyotes howling at night, and skies so wide and so blue that I finally understand what it’s like to feel miles of open space and the roundness of the earth as it curves away before my eyes. The mercury hardly ever rises so high that I need air conditioning, nor falls so low that I need to put socks on my bare feet. That perfect happy temperature and humidity level, which tends to elude New England for all but ten days per annum, is the absolute norm here. And so is the sunshine. Sunshine, which has ever been the perpetuator of my deepest personal happiness, couldn’t be more plentiful: it has rained only 6 or 7 times since we arrived.

The beach-sandy, easy-living culture of SoCal plays to all the best parts of my personality. All 70 miles of San Diego coastline is public turf, which means you can park anywhere and walk, run, swim, surf, kayak, paddle or relax on the beach all year round, any time of day or night and never have to be elbow-to-elbow with a bunch of annoying overly-tanned strangers. There are stretches of beach, and even an entire island, dedicated to San Diego’s love of dogs, and a large number of restaurants welcome our canine friends with spacious outdoor seating and plenty of doggy water bowls. 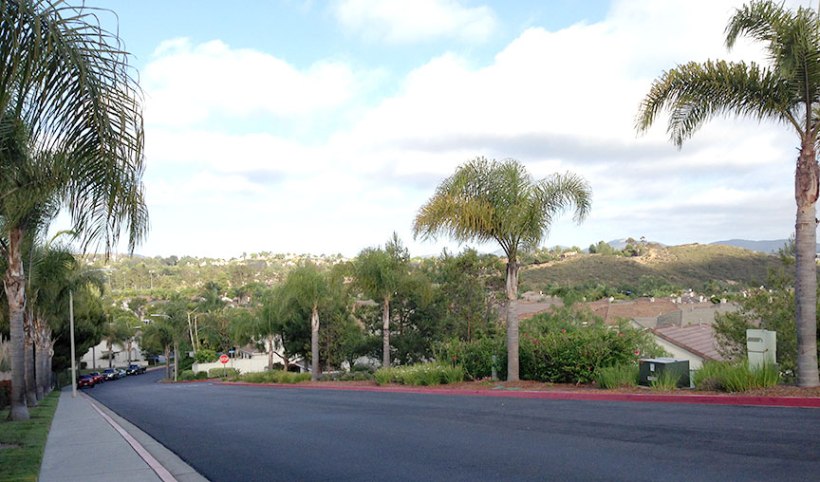 A view of my neighborhood

San Diego is one of the largest hops-brewing cities in the world, housing over 100 breweries and microbreweries within the county lines. The city’s passion for beer has spurned some of the best hashing in the country as well, with something around 15 kennels of trail-running, beer-drinking Hash House Harriers, littering the earth with chalk symbols and baking flour dollops on just about every day of the week. People who become Hashers and Harriettes tend to be a lot like me: they are mostly educated, laid-back people with a love for good trails, fine beer and dirty jokes. Many of them with either no kids or grown kids, they are free to live the social lives they desire. They are athletic but not competitive, health-conscious but not militant. They tend to be quite comfortable within themselves, which makes for an exceptional (and exceptionally large, for me) network of friends and acquaintances who have kept me busy, entertained and running dozens of insanely awesome local trails for over eight months now (which explains my lack of time for blogging). Because of Hashing, I finally have the opportunity to gain that centralize social circle that has always eluded me in life. 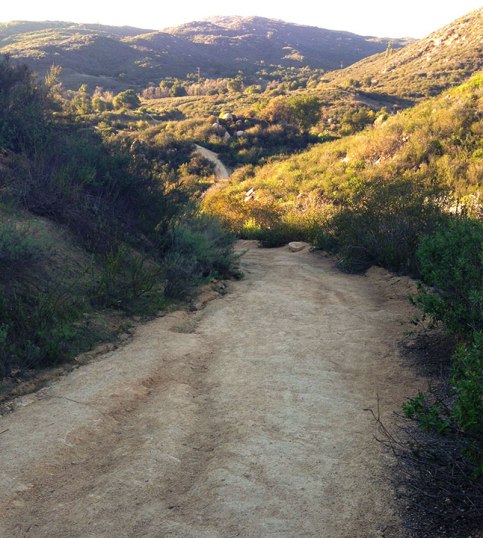 And at least two-thirds of the people I have met here, hashers or not, are transplants like me. They have been equally drawn in by the magnetic pull of the SoCal life. It only figures that people who are bold enough to leave their original lives behind for something better tend to have a lot of other personality traits in common too. Because of this I find it much easier to be present in the friendships I have made, and I feel much more understood. Nobody here bugs me to have kids or to buy a home, or alienates me for my divergent choices. I no longer feel surrounded by complainers who hate their lives but are too lazy or cowardly to improve them. I sense more independence amongst these San Diegans: people play more active roles in their own lives and don’t seem as likely to expect from the world (or their parents) that morphine-drip of emotional and/or financial support that I saw so often back east.

I once heard the advice: “Live in New York City once, but leave before it makes you hard. Live in Southern California once, but leave before it makes you soft.” I used to worry that losing my east coast roots would bring forth the departure of my soul, my grit. But now I see that’s a completely bullshit notion. The only thing I have lost since I’ve moved out here is my bitterness: bitterness about the weather, about the traffic, about friends lost, about the insane cost of living and the life-sucking obligation to always settle for less than what I wanted. I don’t feel that way out here. I don’t feel poor like I did in New England, even though I make roughly the same amount of money. I don’t live in a crappy neighborhood because that’s all I can afford. Instead I live in a nice house in a quiet community, close to the beach and a few minutes from the nearest mountain views.

No, I have not lost my soul: instead I have introduced this soul to the joys I never knew I could afford or deserve. I have not lost my grit: instead I’ve applied it to more positive endeavors, like running for miles up mountains and learning how to stand on a surfboard (it’s much harder than it looks, by the way). I have learned that people desire different things in life and that there is just no good reason – not family, not a job, not fear – to relegate myself to a place or a lifestyle that’s less than what I ultimately desire. I only get one body and one finite period of time to live in it, and I’ve done myself a disservice to have even for a moment wasted it at the hands of my lesser obligations. 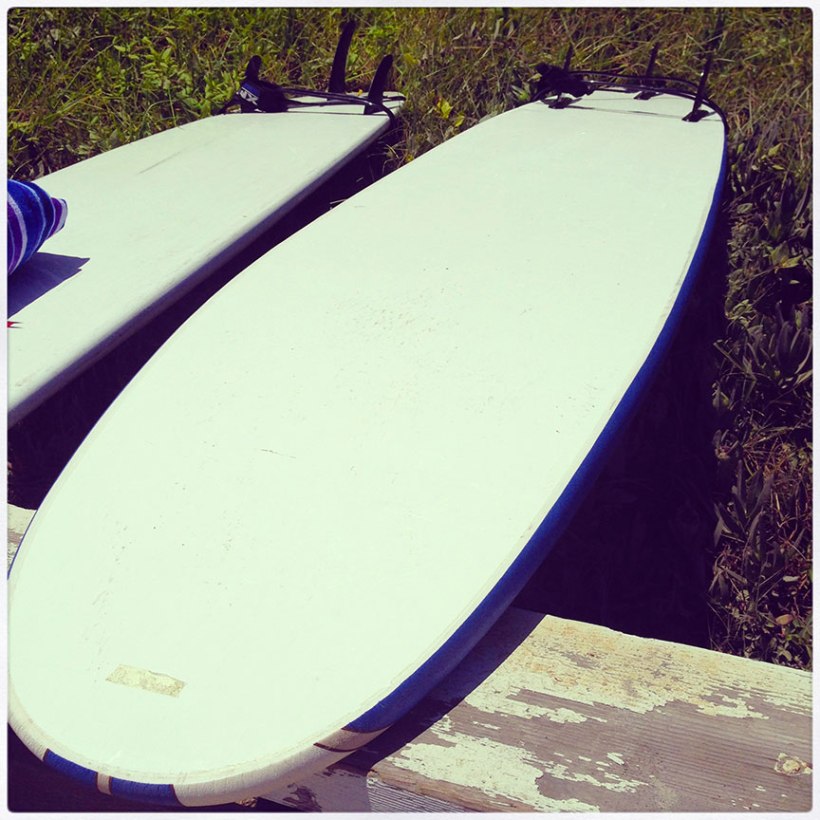 A photo taken after my first surf lesson

As a result of this realization, I have come to no longer care what my distant family members think of my free-wheeling lifestyle. I don’t care how new parents feel about my rejection of the parenting life. It means less than zero to me whether other married couples think Shawn and I act married enough or spend an adequate amount of time participating in each other’s chosen pastimes. I don’t care if fellow runners think I drink too much beer or if fellow hashers think I run too many races. It took me 33 years, but my choices finally feel like they’re completely mine. I finally feel beautiful. I finally feel whole. I finally feel happy. And I mean really, honestly happy. And I don’t even give a shit if you don’t believe that. This is what it means to “find yourself”.

This, my friends, is what it feels like to find your home.

8 thoughts on “A Place Called Home”