You know that quote “The best laid plans of mice and men often go awry”? Well, that’s a really great excuse for the person who actually plans accordingly for distance races. Clearly, that person is not me.

I signed up for the La Jolla Half Marathon because I ran the Carlsbad Half Marathon back in January. I realize that makes no sense yet, bear with me. The Carlsbad Half Marathon is race #1 of a Triple Crown series, so I decided to just do the whole thing and earn the extra medal (yes, I got suckered in to running three races just for a damn medal, get over it). And considering the fact that a two month running hiatus prior to Carlsbad yielded my worst half marathon finish time ever (even though I had a ridiculously great time running it), I promised myself that I would prepare, train and most importantly of all, plan for La Jolla. I even promised myself a half marathon PR, since it’s probably about time I work a little harder and start breaking 2:30.

Makes sense, right? So what is it that they say about the best laid promises of mice and men? 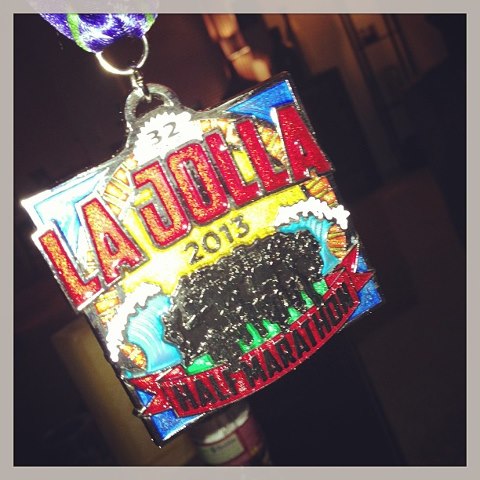 You probably don’t have to strain much to guess that I didn’t train for this race, and that I didn’t PR, either.  As much as I have been tearing up the trails and climbing insane hills for the past several months with some great people, my distance training has gone completely awry. And by awry I mean that between Carlsbad and La Jolla, I only ran three long runs, ever. Okay, two. And by long runs I mean only one of them was over ten miles. And it was barely squeezed in between breakfast plans and a visit to the Safari Park (which, honestly, was way more fun), just two weeks before the race.

Aside from the non-existent training, I planned my route to this point-to-point logistical nightmare of a race only two days beforehand. I sent a friend to pick up my bib. I drank almost no water the day before, and sat in the sun all afternoon. I picked my race outfit by smelling what was clean rather than washing what I actually wanted to wear. I invited myself to stay at my friend Laura’s house the night before, with exceptionally short notice. I forgot to buy gels and bananas for pre- and during-race fuel. I didn’t eat any breakfast, even though I’d managed to pack a granola bar. On the morning of the race, surrounded by four bright-eyed and well-organized racing buddies, I was the most unprepared. None of those things made me feel nervous or guilty however, and that may be the worst part of it all. But I figure that maybe by admitting all of this to you in a super-adorable way, my lack of motivation will somehow become more forgivable.

I’ll give you some time to mull that over while I quit babbling on and talk about the actual race.

The La Jolla half marathon happened on a perfect day for SoCal racing. And I add the SoCal part because the perfect day of all for racing is about twenty degrees cooler than it ever gets in SoCal, so I’ll take 62 degrees and overcast. At least it wasn’t humid, as they say. And the gorgeous scenery: palm trees, sand and ocean views…forget about it. You can’t ask for better. I was just glad that this was only a half marathon race and not also a full, that way I didn’t have to feel like one of the jerks only putting in half the effort for the day. After waiting in stellar traffic to park and emptying our bladders in the even more stellar porta-johns, Laura and I lined up at the very back of the starting line with the old ladies in walkers while the other three girls we came with filtered in farther up. I love standing at the back of the start line, though, because there’s a greater chance of passing a few people on my way to the finish. 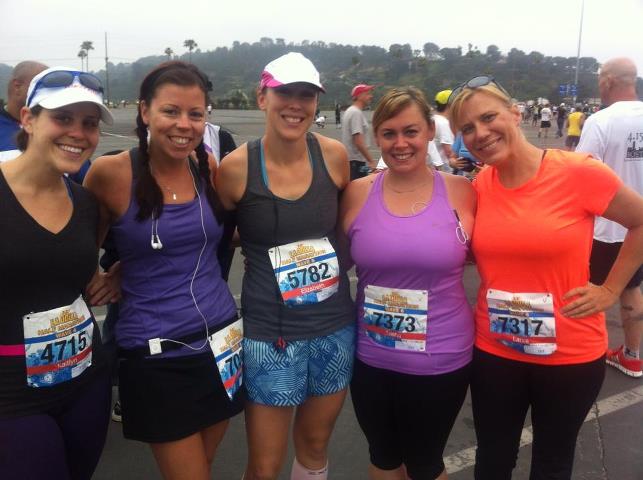 Me and my hash lady friends, taking photos at the porta-johns in order to take our minds off our screaming bladders.

A quick aside on the whole passing people thing. While I was running the race I was thinking about this. After passing 50-100 people over the first three miles or so, I started feeling bad. Like I was picking people off, using them to give myself the illusion of being faster. I would set my sights on someone’s back and decide I had to get past them. Hey, little pink shirt that says “12 in 2012”, eat my dust. You there, lady with the running skirt that keeps riding up, you’re next. But, kind of like with driving (you know, when you’re safe inside your vehicle and removed from real human contact), those people ahead of me aren’t really people. They’re improvised mini-goals. Like little moving pace markers, with faces. So the truth is that when I’m trying to pass people at a race, I’m not actually competing with them, I’m competing with myself and using their ever-changing speed as a point of reference. And at that realization is where I met my biggest improvised mini-goal of the day. That one might have been personal.

Because I didn’t drink enough water the day before the race, I freaked out and gulped down an entire bottle of water that morning. Naturally, the one pre-race porta-john stop was not sufficient so by mile 5 I was dying. Each pit stop on the course had two porta-johns and at least 8 people in line, so I waited until I came upon the public beach bathrooms that I knew would be open at the base of the Torrey Pines hill. There were a dozen stalls so I only waited a couple of minutes. By the time I was done my breath was all caught up and I had an easier than expected mile-long climb up Torrey. But once I arrived at the top I looked ahead, and to my horror I saw that my bathroom break had gotten me behind the 2:45 pacer! Frack. All that well-intentioned “I’m just having fun here” be damned, I’ve never taken 2:45 to finish a half marathon, and I wasn’t going to start today.

So I kicked my pace up a notch or two, which was really hard because it was mile 6 and miles 6 through 9 is often my dead zone during a half marathon, and it definitely was today. I was hungry and my legs were lead bricks. I was feeling every missed long run and every burpee I never did. It took me two miles just to pass that bastard 2:45 pacer, whom I was convinced was either running too fast (definitely running too fast) or downright mocking me. What an asshole.

And that’s when my stomach decided to have a say.

Now, I have some pretty irritable bowels. And I don’t mean a little gas here and some indigestion there. I’m talking a stomach full of gray-haired, bejowled and sour-faced old curmudgeons in ugly cardigans, who hate when I run for longer than 90 minutes and often don’t wait until the run is over to tell me so. Today was one of those days. Thankfully, the porta-johns were clear right before the 10 mile signs so I didn’t have to wait behind any other unfortunate pit-stoppers. Also thankfully, I had swiped two of the caffeinated gels from the volunteers and downed the second one just minutes earlier. So by the time I finished dealing with the curmudgeons, my legs were finally ready to run the damn race.

I always love the last few miles of a half marathon. I’m usually numb from the waist down by then, hopped up on various forms of sugar and artificial energy boosters, and I can see the light at the end of the proverbial tunnel. And the great thing about this race is the last three miles are a direct payoff from the previous nine’s upward-bound hills. I flew past that 2:45 jackass again, this time for good (although it still worried me that I ever saw him – those pit stops were going to cost me dearly), and made up a shitload of time on all those downhills while everyone else hemmed and hawed about their bad knees. I crossed the finish line with a grin on my face (as always) and never even looked at the clock on my way by.

For those of you who are curious, my final time was 2:41. My current PR (on a completely flat course) remains unmoved at 2:34, which is just about what I would have run if I hadn’t stopped at the bathrooms. I wish I could tell you that I’m embarrassed. I think fundamentally I am – a few of my friends set immense PRs that day – but in reality I didn’t expect much from the race, other than to complete it. I’ve been feeling that comfortable indifference a lot lately, and I think that’s just fine. Well, for now.

I believe there really are two completely different – and acceptable – ways to approach a race: for a PR performance or for fun. And lately I’ve just been choosing the fun route. I make a lot of jokes about being lazy and unmotivated, but in all honesty I have been putting in some good mileage over the past few months. I even broke a few weekly mileage PRs. But I actually have mindfully chosen to spend my miles elsewhere besides on the path toward the half marathon race. Or any race, really (I apologize in advance, Born to Run 50K). Instead I have been doing a great deal of group running (and beer drinking), and have come to love it so much more than running solo. I have also been spending a lot more time in the hills, which are often steep enough to require hiking, so running has sometimes taken a back seat to those amazing views of the mountains and the ocean from up above. I have rekindled my love for practicing yoga and skipped quite a few runs to hit up a class…or to recover from one. I have taken the opportunity that my new home and lifestyle has afforded me, to discover new things I love about running. And to seek out new ways to keep from burning out while keeping my mileage high enough to be able to wing a half marathon….you know…if the day ever called for it. I am most definitely enjoying this new more laid-back view of training running, no doubt about it.

But don’t worry, I’ve still promised myself that I’ll train harder and PR at the America’s Finest City half marathon. Why? Well, because I’ll never learn, that’s why. The curmudgeons in  my belly are already shaking their heads.

8 thoughts on “If You Can’t Beat Your PR, then Kick a Pacer’s Ass: La Jolla Half Marathon”